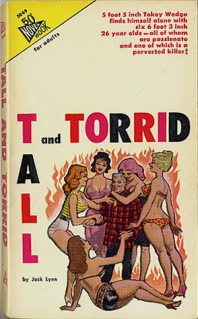 I once had a therapist ask me what was the one thing I would want to say to all the tall people in the world, if I could.

“Trim your nose hair,” I said, which was the first thing that came into my head.

I had indeed, just that morning, stood beneath the looming presence of my six-foot-something Jesuit superior, distracted from whatever platitude he recited for my own good by the several long gray tentacles curling out of the dark cavity of his nostrils like some underwater creature.

It only confirmed for me that he had no confidant in his life, no secret mistress or attaché to whisper quietly over tea or their pillows, “I’ve been meaning to tell you: trim your nose hair.”

Of course, if you’re not in that trusted position, it’s impossible to say anything to someone whose nose hair is out of control. Yet, it’s just as impossible to look away. It’s human instinct to stare, especially if you’re shorter than the rest of the world. It belongs in the same distracting category with things like spinach in someone’s teeth, or a car pile up, or the surprising number of startlingly well-endowed homeless men I’ve glimpsed over the years in New York exposing themselves publicly. (At the latter, I’ve first been shocked, not as much by the nudity as the size, and then thought, “good for you. You deserve some leg-up on the rest of us.”)

Equally as distracting and most befuddling for me are low-cut summer blouses on office coworkers. In July, a deep-slung nylon hammock framing bare heaving flesh, dissected vertically by a long cleavage line, displaying almost everything but the nipples, presents itself at the desks of almost every female office worker under the age of 40. Flip-flop sandals often accompany them, as well as complaints that the office is too cold. Even as a gay man, it’s impossible for me not to look. Try as I might to keep my eyes on my coworker’s face, talk to her about a project, or the weather, or the new Pope, for god’s sake, my eyes keep dropping, as if I’m not certain of what I just saw, or to see if the cleavage line has moved slightly to the left or flipped horizontal, or if her breasts have started to rotate independently of one another. Whatever the reason, as incapable as I am of sexually harassing a female, I also can’t not look, and would be as demoralized as she, if she noticed. While my imagination tells me to grab the florescent-blue highlighter off her desk and draw a pair of smiley faces on her blank canvases, my brain tells me that if I were caught simply peeking, I’d go blind on the spot, or swallow my tongue, or wriggle out of my skin and retreat into my office, ashamed, sexually baffled skeleton, waiting under my desk for the call from Human Resources.

When I’ve shared my concern with female friends, some have hinted that, not only do I not understand female anatomy, but also it’s sexist to expect women to wear more conservative clothing to the office in the summer. And I cower thinking, “You’re right. You’re right. I’m a pig,” until I realize hours later that, while it’s true, I don’t understand female anatomy, their other point would only be correct if there were equal-opportunity “summer viewing wear” for men. We men are not given an option, sweating in our summer suits on the subway, and in our ties in the office where the thermostat is turned to 75 degrees by said coworkers in said low-cut blouses and flip-flops. And I’ve tried to compare it to catching a glimpse of a facilities guy’s butt crack. But actually it’s not like that either. You see way more of the breasts in a summer blouse than you do of the butt above a tool belt, and either way, you can stare at a plumber’s crack for as long as you like without having to look him in the eye. It would need to be something more along the lines of the 1970s rocker jumpsuits that performers like Kiss or Elvis wore open down to their giant belt buckles, or short tennis shorts that offer a partial ball-sack view. I’m not talking about what it would have been like to chat with Gene Simmons or Elvis after a show, or Björn Borg lounging on the lawn in his Daisy Dukes after a match with one knee raised. Those guys would be insulted if you didn’t stare. I’m talking about what if a male coworker walked into a meeting in sequined spandex revealing a furry exclamation point down the center, dotted by his navel, or on “Shorts Day” in the office (if that existed), if the comptroller spread his knees in a meeting “showing brain.”

You know you couldn’t avoid staring, whether you were attracted or repulsed by it.

Anyway, when my therapist asked me for the one thing I would say to all the tall people in the world, I thought of nose hair, and then, “please, be considerate about how high you install kitchen cabinets. And urinals.”

My therapy in the 1980s, when I was still a Jesuit theology student at Cal Berkeley, taught me most importantly that I was not as stupid as I thought I was, and that I could come out of the closet without destroying my whole world. Any of the other things I explored for a session or two amounted to the revelation that being raised by several teenage sisters could be confusing, and being spanked with a flyswatter might have been a little excessive (no matter what my mother, who with eight children was the quintessential “Old Woman in the Shoe,” may have heard from child-rearing books from the 1950s). But, I also explored how being just about the shortest person in any room has affected me.

When my therapist heard my initial answer to her question, however, she noted, once again, that I tended to mask my darker feelings and concerns with humor, a trait I inherited from my dad. In fact, the nurses and doctors didn’t realize my dad was on the verge of very fatal congestive heart failure because he was doing his George Burns shtick with the nurses in the ER. It’s a defense mechanism that is destined to make the entire room burst into a laugh, punctuated by a gasp, then a full-stop “oh,” as they reach for the defibrillators.

But she was right, while I really do wish tall people would trim their nose hair and stop hanging urinals so that I don’t have to stand on my toes, I probably had something more serious I’d want to say to all the tall people in the world.

Being small is never an advantage. Ever. There is nothing special about being able to reach bottom shelves better than everyone else, and you can’t get to the back of them, because your arms are also shorter, without crawling all the way into them. While a petite woman may be able to turn a situation to flirtatious advantage when asking a tall handsome stranger to get a box of baking soda off the top grocery shelf for her, the best I can hope is that the guy might think he can get my pot of gold. There is nothing attractive about a man who can’t reach things for himself.

This leads to a variety of prejudices, conscious or not.

In major clothing chains like Macy’s and JCPenney, men’s shoes often start at size eight, while boys’ shoes stop at size six. When I’ve asked for my size seven-and-a-halves, the men’s shoe sellers simply reply, “we don’t carry sevens, check in boys’,” while the boys’ sellers tell me to “check men’s.” I’m not sure if their blank stares, when I inform them that sevens are not available in either department, are because they simply didn’t know the size had been overlooked or because they can’t believe size seven feet exist. The sad thing is that I’ll take their blank stares over the smug distain of the Men’s Wearhouse salesmen who say, “we don’t carry that size in the store, you’ll have to order them online,” as if to say, “this is another reason you don’t belong here. Now go order your tiny shoes in whatever private little hovel you live, so I can wait on that linebacker over there.”

Of course, I scan the former linebacker and the blond, surgically enhanced girlfriend helping him pick out a golf jacket, and I know that, while he may not be able to afford Ermenegildo Zegna, he nevertheless makes enough money to avoid Macy’s.

Recently, at a university where I’ve worked, the admissions officer for the business school directed me to the news feed on her school’s homepage, cooing that I must check out the story about one of their graduating seniors who had already been hired by one of the top financial firms in the City. She was proud of the job placement and that they’d posted it online, but added, “you’ve got to check him out. He’s just gorgeous.” And so, as I stared into the digital glow of his deep green eyes, one of those ubiquitous young men of mediterranean ancestry in New York City—dark hair, light olive skin, jock-ish features, solid jaw—my first thought was simply, “tall and handsome gets the job.”

I didn’t realize I had spoken the thought out loud until, after a short silence, one of the women in the room said, “well, small and endearing gets it too, sometimes.”

Small and endearing. Like a Disney mouse. Or a Hobbit. I suppose there are some advantages to being so, but few people want to entrust their business to you, or pass the ball to you. They will, sometimes, ask you to remove a splinter from their giant paw or trim their nose hair for them. And I guess I’m lucky that my partner’s favorite author growing up was J.R.R. Tolkien.

So, what would be the one thing I would say to all the tall people in the world? I guess I’m not so much avoiding an answer, as unable to answer it easily.

I can’t really address my height with tall people. I can’t really stop them from saying things like, “well, thank heavens you don’t have ‘little man’ syndrome,” or “really? Five-four? You look more like Five-six!” Both are meant to be complements. While the former refers to that short-endearing-hobbit-like quality I’ve cultivated, instead of that of a short-fused bantamweight with something to prove, the latter is the fault of men my size. We lie. So many five-foot-four men claim to be five-foot-six that the world believes that’s what we are now.

But really, what would I say? I guess it’s what everyone else who isn’t a J.F.K., Jr. look-alike would say: be considerate, we exist. Walk a few feet in my size seven-and-a-half Rockports before you install the bathroom fixtures or hire yet another tall college athlete that you wish you looked like, too. And yes, please, please, for heaven’s sake, trim your nose hair.