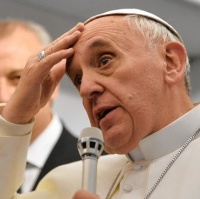 “Who am I to judge a gay person of goodwill?”

Several friends and news organizations posted what seemed to be a startlingly positive quote from Pope Francis I on Facebook and other media today.

From most reports, it appears Francis’ statement was made in reference to gay priests, not LGBT people in general. When asked about “how he would respond to learning that a cleric in his ranks was gay, though not sexually active,” he responded in Italian, “Who am I to judge a gay person of goodwill who seeks the Lord? …You can’t marginalize these people.” His response, of course, presumes that a gay priest “of goodwill” is keeping his vow of celibacy, and therefore living the life the Vatican expects all gay Catholics to live.

Francis is merely reiterating (all be it in an historically kinder, gentler manner than his predecessors) a portion of recent Catholic teaching on homosexuality. The Vatican has said for sometime now that gay people shouldn’t be marginalized. But they have also continued to stress that gay people must not have homosexual sex of any kind. The teaching is a variation on “love the sinner, but hate the sin.” Gays are not “inherently disordered” anymore, but what they do still is. Treat them as one of the flock, but only if they don’t do that abhorrent gay stuff for which we should cast them out. Don’t be mean to the gays anymore, but don’t encourage them either, especially if they start pushing for equal rights and marriage. Then you can let them have it.

The problem is that current teaching still sends a terribly conflicted message to LGBT Catholics, leaving those who are not able to live celibately with nearly as much shame and difficulty in their personal lives as the church’s previous teaching. It sets up that classic disconnect between the person (who is to be treated respectfully) and his or her sexuality (which, in many cases including homosexuality, is treated as sinful). It also leaves church leaders room to continue to denounce gay rights and gay marriage in language that is often cruel and inflammatory.

Of course, as with several of the statements Francis has made in the past few months, like his comments in May that seemed to open heaven’s gates to atheists, conservatives in the Vatican have already spoken up with their own “what he meant to say was not what he said at all” glosses. And in the same interview, Francis himself also made it clear that he wouldn’t be reversing the church’s current position on women priests anytime soon either. It will take a lot for the Vatican to catch up with other more progressive Judeo-Christian congregations who no longer treat women differently than they do men, lay people differently than they do clergy, LGBT members differently than the straight ones—because many Catholic Church leaders base their very understanding of themselves and their role in the church on these differences and the special status it affords them.

I’ve puzzled over the spurts of hopeful pope quotes that have circulated around the news and social media since spring. I’ve wondered if they are indicators that people of a variety of beliefs are longing to hear a religious leader’s voice that is less like the cruel disciplinarian autocrats we’re use to and more like, well, Jesus.

Or is Francis himself testing the waters, wishing he could speak more compassionately and humanely than his predecessors.

For that matter, he will even need to speak more compassionately and humanely than himself. It’s hard to know what Francis truly believes about LGBT people, when I’ve read the hurtful things he said as Cardinal Bergoglio of Buenos Aires just a few years ago.

“Let’s not be naïve, we’re not talking about a simple political battle; it is a destructive pretension against the plan of God,” Bergoglio wrote in a 2010 letter calling followers to join in protest against same-sex marriage rights. “We are not talking about a mere bill, but rather a move by the Father of Lies that aims to confuse and deceive the children of God.”

I’m very willing to allow a guy to change his mind or to offer a compromise, but it’s hard to forget that the rhetoric he used in public to rally protesters was contradictory to any private willingness to compromise, and damaging to what his congregation understood about gay and lesbian people. Calling same-sex marriage and adoption “a move by the Father of Lies,” was nowhere near the hopeful language of compromise or compassion, and I have been concerned with his willingness to separate his public and private opinion so drastically.

If the Pope hopes to speak more compassionately, and to be taken seriously doing so, he will need to be honest enough to admit that what he has said in the past was horrific, wrong, and harmful, and that what he is saying now is the result of a change of heart, prayerful discernment, revelation even. And something similar would need to be said institutionally, as well, by the Vatican and Catholicism, much like the what we saw with Exodus International last month.

That would be big.

That would be my Pope hope.