So, cut to the chase. Would I stand for three hours in line for a cronut ever again? No. Was it an adventure? Yes. Did we have fun? Yes. Was it fun for all the reasons I expected. Not exactly.

At about 6:30 this morning, Bob and I both woke up and couldn’t fall back to sleep. We’ve been talking about queuing up for cronuts for a while. For the uninitiated, a cronut is a cross between a croissant and a donut, introduced back in May of this year by Pastry Chef Dominique Ansel at his SoHo bakery. Since the first deep-fried buzz began to hit the food blogs, people began camping out on the bakery’s doorstep to be among the first lucky 150 to 250 people to snag a cronut or two before the day’s supply runs out. (Ansel makes them only once a day, and there is a two-cronut limit per customer.)

So, in that wee groggy, cloudy hour of the morning, this morning, we caught each other’s half-opened eye and murmured to each other, “should we do it?” We had learned from a few websites that if we got there by 7 a.m., we were most likely to get a cronut. However, due to that damn Jimmy Fallon inviting Ansel to demo the frying and filling process on the Late Show, the line was already wrapped around the corner of Spring and Thompson, and well past the first couple basketball and handball courts, about as far back as we’d seen in any of the photos on the food blogs.

I left Bob to hold our place in line, while I ran for coffee, and when I returned another fifty or so people had filled in behind him. Bob had struck up a conversation with swimming instructor Angel from Queens, who was hoping to get a cronut before going into work, as well as Joe and John, a couple who live on Union Square and were intending to get in their car and drive to Pennsylvania as soon as they had procured their cronuts for the road. There was a variety of others in line with us: German tourists, a family from the Bronx, two club girls who had simply stayed up the rest of the night. But what we all seemed to have in common was that we were all food adventurists, and we’d been reading about the cronut on food blogs since long before they began hitting the mass media.

The best thing about the day in line was three hours of food conversation with Angel, John and Joe. We huddled around one another, cell phones in hand, copying down the names of each new restaurant we heard mentioned by the other. “What’s your favorite, Thai?” Angel would ask and we’d all chime in for a few minutes. “What’s your favorite dish at Lupa?” Joe asked and John blushed as though we were talking about childhood crushes. Unexpectedly, we found ourselves among Our People, and it was a pleasure. Unlike waiting in line for Magnolia Bakery, where the Sex in the City tour bus dumps tourists off for one more “Sex in the City experience,” regardless of whether they have actually seen the Magnolia episode, these were people who loved food and wanted to learn more whether or not it had anything to do with the cronut. (Of course, at this point, I should add a knowing “just give it time.”)

The other fun thing about the morning also involved my cell phone. I started photographing the line and posting our progress on Facebook almost as soon as I came back with the coffee. Friends and family from all over the globe monitored our progress like a lunar landing, and wanted to know our opinion when we made that one giant leap for cronut-kind.

So what about the cronut itself? There was a pretty strong consensus among the five of us who’d “group-bonded” over our three hours of waiting and comparing food notes. And it was faint praise. For me, it was surprisingly more like a donut and less like a croissant. In fact, a little too much like a cruller. I guess if you deep fry anything it’s going to come out more like a donut than any of its other properties, but I found the cronut kind of rubber-spongy. It wasn’t served warm, and didn’t have any of the flakiness or butteriness of a croissant. This month’s filling is coconut cream, which was delicious. I probably liked that part of the cronut the most, but a few in our group wished they hadn’t missed July’s filling, which was blueberry or blackberry. 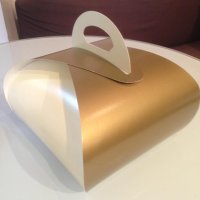 To be fair, I should say that Bob liked his cronut more than I did mine, and he says he would toy with the idea of doing it again. Although, here it is 4:30 in the afternoon and we still haven’t quite recovered from getting up so early and queuing up so long. And I will add that Bob and I stumbled upon Ansel’s bakery in SoHo once before a couple years ago, before the Cronut was a twinkle in anyone’s grease vat. The shop was busy back then, but not the madhouse that it was this morning. The staff had time to be their friendly selves (something they still work very hard to be despite the strain), and several of their other pastries, like the coffee eclair, were (and still are) amazing, and come wrapped up in the same pretty gold carrying case.

So later in the day, when they sweep away the dross from the morning’s Disneyland-like rush, it’s worth stopping in for any of the other standard treats in the showcase. And there’s not wait, though that was the one part of the morning I would not have given up. 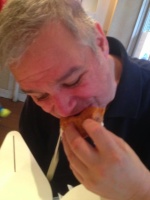 Bob demonstrates how to eat a cronut.

4 thoughts on “the hole story: waiting for cronut”